Where are you from? Where do you live now?

I was born in Calgary, AB, and lived there until I was 29, except for a few 6-month periods where I was travelling. Since 2012, I’ve been working and living overseas with Skateistan. I’ve lived in Afghanistan, Berlin, Cambodia and South Africa and for the last year I’ve worked remotely which means I haven’t really had a home base. I’m trying to move to Portugal. It’s in a good timezone to work with the Skateistan locations, and it has great weather, skating, surfing, friendly people and somewhat flexible immigration laws. The pandemic threw a bit of a wrench in that plan but I maintain hope!

How many years have you been skating? What influenced you to start skateboarding?

I started when I was 14, so technically that would be like 23 years now if I’d skated that whole time but I haven’t been so consistent. My best friend encouraged me to start and a boy from my bus gave me a board which really kicked things off. I had met 2 or 3 girls who skated and I was already a pretty avid snowboarder so I got into it. I ended up having quite a lot of issues with my shoulders dislocating countless times so I was in a sling a lot and doing physio. I eventually had a few surgeries on them.

In my 20s my skate community, such as it was, had all moved to Vancouver so I didn’t skate very much but since leaving Calgary I’ve skated a lot more and my skating’s improved, proving you can teach an old dog new tricks.

Tell me about your favourite skate adventure story?

My favourite skate adventure stories are always the ones where you find skating where you least expect it. I was lucky enough to be on a bus in Costa Rica when I was 20 with a couple of friends. We had our boards with us and we were gradually making it back inland after a week in a coastal area. We were in a kind of go with the flow mode so we randomly chose a bus based strictly on its appearance since we knew they were all headed more or less the same direction. The bus we chose was painted a bright violet and the name El Rapido (the fast one) written on the side in white italicized letters. I remember the bus driver looked a lot like Carl from Family Matters, with a long curly mullet. The whole situation felt enchanted from the get go.

Anyways, the driver saw our skateboards and told us he knew exactly where we wanted to go. He told us there was a big bowl at a hotel up the mountain but it was too late to go tonight, the connecting bus had stopped running so we’d have to stay at his house and catch it first thing in the morning. That night the three of us watched Seinfeld on a 10” black and white TV with Carl and his wife, made chit chat in our poor Spanish over our tasty plates of beans and rice, and then went to sleep three of us in the single bed we were generously offered in the guest room. The situation was totally absurd.

The next day we caught the early bus up the mountain, no idea where to get off exactly but again the driver saw our boards and knew where we were going better than we did. We started a hike up a path that eventually revealed a big bowl in the jungle. It turned out it had been built by a guy from Seattle who was also managing a resort there. The hotel was well above our price point but they had a special discount for skaters and free camping by the bowl was also an option. That story is about the benefit of going with the flow when it feels right.

Who’s your skate crew? Who influences you?

I wish I had a skate crew to skate with regularly but as I’m pretty nomadic these days it’s usually just me and one pal, which can also be really nice. I feel pretty connected to a group of skaters I have known a long while from across Canada. Some of us got together a couple years in a row for an all-ladies skate trip but these things are hard to coordinate.

We hit Portugal and Greece for skate trips in 2015/2016 and both were super memorable times. We were going to try to make it to Wheels of Fortune this year but it’s postponed so we’ll probably reconnect next year there. Jeff Thorburn, editor of King Skate Mag, is another person who I’d count in my international crew. He’s been really supportive over the years. Otherwise all the ladies at the Skateistan schools who shred inspire me, like Tin, our GM in Cambodia, and one of our students in Mazar who went to a training camp in China for the Asian Games. She was the first girl in Afghanistan to land a kickflip, I still can’t kickflip!

What is your position at Skateistan? What does your work day look like?

I’m the Programs Director and I spend my days balanced between connecting with the international and local teams worldwide, developing trainings for our programs team, reviewing our applications and reports to donors, and doing some longer term planning, and these days doing some planning and re-design of our programs to adapt to the changes with the pandemic. There’s a lot of video calls involved.

Can you tell us about The Goodpush?

The Goodpush Alliance is an initiative by Skateistan to share our resources and knowledge with the many other awesome skate projects that have cropped up around the world and also to create more opportunities for these organizations to connect and share with each other. It’s our way of supporting this niche to reach their goals and supporting the scene overall. We want to do our part to support other orgs to work at a high quality so that skateboarding for social good can always have a positive image and an effective impact for the participants and communities.

We focus on helping orgs with their child protection, girls’ inclusion and leadership, strategy, creating safe spaces, reporting to donors and applying for funding. Recently we’ve been running webinars about adapting programs to the Covid-19 situation. We try to stay flexible to the community’s needs. The whole thing is managed by Rhianon Bader, another Calgarian. She likes to describe it as Skateistan’s “agile arm”. You can check it out at goodpush.org and @goodpush on Insta.

I’m not a business person, you won’t see me entrepreneuring any time soon. Skateistan made a 10 year strategy last year that involves building 6 new schools in the next 10 years, so we’re going to be pretty focused on figuring out where to do that and getting those projects off the ground. Skate-wise my goal is to go skating more often than my current once a week routine and stay strong physically so I can keep skating for decades to come. I’m trying to work on more shuvits and things on banks. Something about banks really scares me because I’ve had some of my worst dislocations at an angle, so I need to mentally get past that and just go for it.

You have the opportunity to work with skaters and companies from around the world, what can you share with where the skateboard world scene is at?

It seems to me that the scene has developed a strong social conscience, and a really generous spirit. Vans, and even the bigger non-core shoe companies have a strong CSR side, and people like Jim Thiebaud who runs Delux just set the bar so high for what generosity can look like in the industry. Delux provides all of our skate equipment in-kind to run our programs. We’d be in a very different place without them.

Skateistan also has a number of successful collabs for decks, shoes and wheels. I’m not directly involved in that side of things but to me it shows a really supportive international community. On top of that there’s a growing support and representation for queer skaters with a handful of skaters finally coming out and some visible representation with Skateism magazine. And there’s more awareness of mental health issues like depression, suicide, and burnout for those who are working in social skate in some really challenging situations. John Rattray has been a strong leader and advocate for better mental health support across the skate industry world wide with his Why So Sad campaign and other initiatives recently.

As a woman in the skateboard industry, what challenges have you encountered?

I’m not really in the industry per se – I think of the industry as more the commercial side and since I’m not involved even with our co-branding or anything like that I can’t really speak to the challenges out there, though I’m sure they exist. I really admire women like Mimi Knoop, Vanessa Torres, Lisa Whitaker, Leo Baker, Kristin Ebeling and others who have blazed a trail for womxn in skateboarding by just doing things their way instead of trying to fit into the standard straight white male skate narrative.

When I come back to Calgary these days I really feel like I have a new skate community there because of what you’ve created with 100%. I know I’m not there very often but it’s totally awesome to be welcomed by something like that in my hometown.

So yeah, I forgot to mention that you’re also my crew. If I lived there I’d definitely be spending more time skating with you and 100%. Also worth mentioning that I remember Erica helping me with shuvits at the temporary city park at Vincent Massey Jr. High back in like ‘01.

Shout out to Sky Brown, what a legend. She had a gnarly like 20 foot fall recently from a vert ramp and needed surgery on her arm but she’s on the mend. She’s been a big supporter of our work, through a co-branded deck with Almost, and she visited Phnom Penh to inspire the community kids at our grand re-opening event at our new location in 2018. She’s only 11 and will be representing Great Britain for skateboarding at the Olympics next year. She’s a great example of the limitless talent a person can develop if they start skating young and she seems just totally mentally free from any negative preconceptions about what girls or women can do on a board. 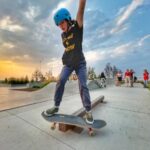 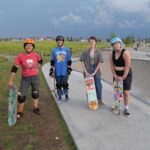